The original family farming business in Angus was started in 1954 by James Brunton Snr, a butcher by trade, and his son Hugh upon his return from national service in Berlin. James bought Crudie Farm beside Arbroath whilst still in partnership with his brother Eddie at their butcher shops in Colinsburgh and Elie in Fife. There had been four or more generations of butchers serving this coastal area of Fife.

At Crudie in 1954 horses had just made way for the first generations of tractors but many of the farm jobs were still undertaken manually. Very quickly a Clayson combine was purchased transforming the harvest operations. Sugar beet was grown for the sugar factory in Cupar and was transported by train from the local siding at Cuthlie until the factory shut down in the late 1960's. In the early 1970’s the potato plantings and harvest were also mechanised and the 100 hand pickers were replaced by 4 people on the harvester. This was made possible by the use of Scorgie stone seperators and then the faster Reekie seperators. Around this time forklift trucks and pallets appeared and were a huge leap forward and made many of the manual potato handling jobs a thing of the past. Electric bag stitchers replaced hand needles and twine

auto-weighers replacing swing balances. Irrigation was introduced to all parts of the farm in the late 1970’s following the drought of 1976. Boreholes and dams were used to supply the water to the fields. Cold stores were built in the 1980's to extend the length of time potatoes could be kept for whilst improving their quality without the use of any chemicals.

Many different crops have been grown over the years including daffodils, for flowers and bulbs, and blackcurrants for a few years. No livestock have been kept for over 30 years and all straw is now incorporated to help with the soil structure. Land was bought when possible leading to economies of scale. In 2001 the first field was rented in Easter Ross to grow potatoes. 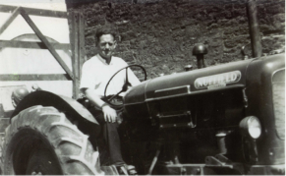 This has grown year on year to become a major part of the business. The construction of a 6000 tonne cold store with grading facilities in 2011 cemented our position in the area. In 2012 renewable energy was used in the business for the first time. Wind power generated by J Scott & Partners on Fearn Farm is fed directly into our coldstores.

In April 2011 Douglas and Robin decided to split the old family business with James joining Douglas in the new business.